AJAKA: US sanctions will not directly affect the Lebanese government unless one of its members is on the sanctions list 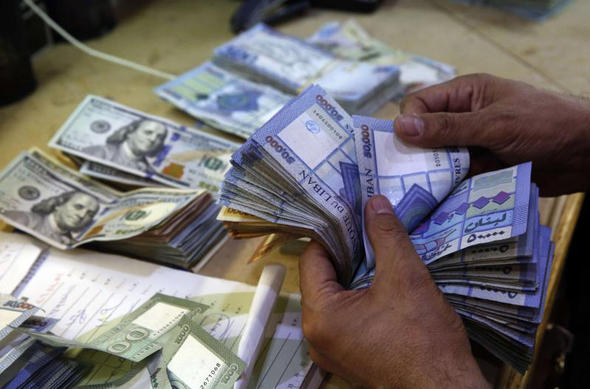 Lebanon’s long-awaited cabinet is still to be determined. Six months have passed since parliamentary elections and despite extensive negotiations, agreement on the shape of the new body remains elusive.

The cabinet notwithstanding, May’s elections saw much of Lebanon’s traditional political establishment returned to government in more or the less the same shape as it left it before the vote.

The sense of continuity extends beyond the political elite. The deteriorating economic situation that preceded the elections continues and, if anything, has grown more severe. A few months ago, Bloomberg News reported the International Monetary Fund (IMF) said the Lebanese economy was on an unsustainable path and urgent action was required to stop the decline.

Because of the Syrian crisis and the closing of border routes into Jordan and Arab regions, a 2.1% drop in exports was registered in 2017 worth $2.5 billion to the Lebanese economy.

By the end of 2017, the public debt was $79.5 billion, compared to $74.9 billion the year before, an unprecedented annual increase of almost $5 billion. With no concrete steps in place to break the cycle of increasing annual debt, Lebanon will remain one of the most indebted countries in the world.

Exacerbating challenges presented by Lebanon’s debt are US sanctions on Hezbollah, aimed at isolating the group and diminishing its financial resources.

First, Ajaka said, were the difficulties legitimate Lebanese businesses would experience in establishing international lines of credit because of checks they might be potential Hezbollah operations.

“Second, are the challenges in implementing the resolutions of CEDRE 1 conference,” Ajaka said, referring to the April meeting in Paris during which Lebanon committed to a wide-ranging programme of financial reform, aimed not least at stemming the flow of potential income through the country’s endemic corruption.

However, with fears in the government over appointing Hezbollah ministers, there is a risk officials will be unable to cut through the country’s patronage system and deliver the kind of reform promised in Paris.

Third, the sanctions may delay the transfer of remittances of Lebanese expatriates to Lebanon’s banks, on which the sector relies, Ajaka cautioned.

Last, “the freedom of movement of Lebanese businessmen targeted by the sanctions will also be severely curtailed,” Ajaka said.

However, Ajaka said he was confident resolutions agreed to in Paris could be implemented.

“Indeed, nothing would be able to draw Lebanon out of the economic and financial crisis it is in more than the injection of the investments agreed at the CEDRE conference, along with the promised reforms in public finance and combating corruption,” he said.

“The main danger to Lebanon comes from the size of the debt service, which in the absence of reforms and investments will lead to bankruptcy.”

If the incoming Lebanese cabinet fails to address corruption, reduce expenditures and raise revenues then, as experts have speculated, the country’s financial ecosystem would be in peril. 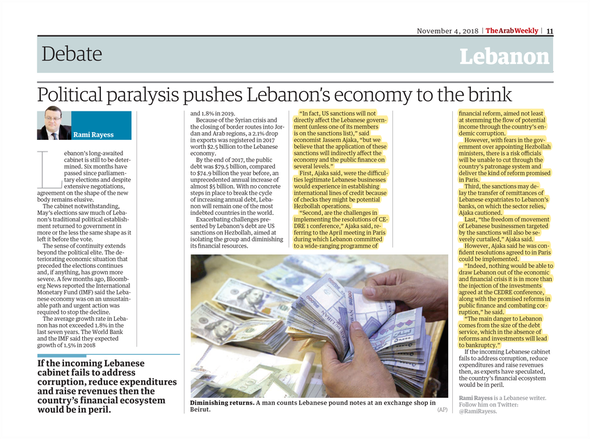